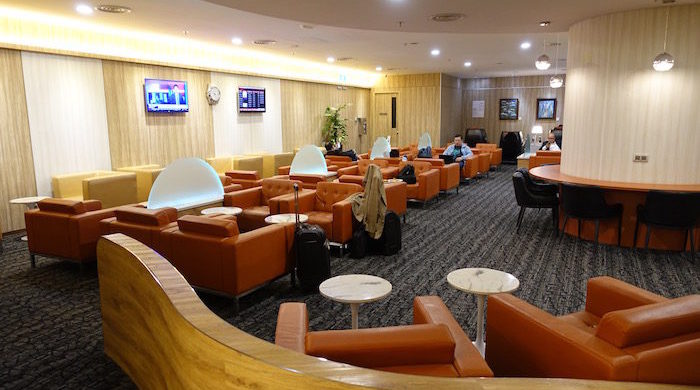 Man Goes To Jail After Using Too Many Priority Pass Lounges September 17, 2016 by lucky 2 Comments Every so often we hear a story of someone who gets in trouble for using lounges too often. There’s an old trick some people use where they’ll book a refundable ticket in order to get access to a lounge, and then later cancel the ticket. For example, in June I shared the story of a German reporter who did this at the Emirates lounge in Frankfurt two days in a row (the show was cringeworthy). Well, The Straits Times has the crazy story of a guy who was jailed for two weeks after he spent 18 days in transit at Changi Airport using various Priority Pass lounges . Per the story: On Friday (Sept 16), Raejali, a former business development manager with Royale Consultant Management in Singapore, was jailed for two weeks after he pleaded guilty to three out of 31 charges of forgery.

A district court heard that Raejali had a ticket for an AirAsia flight, scheduled to depart for Kuala Lumpur at 7.05am on Aug 21. The night before, he checked in at close to midnight and went to the Plaza Premium Lounge in Terminal 1 – using his boarding pass and his Priority Pass, issued by Citibank.

But Raejali woke up late and missed his flight. He decided to continue using the facilities at the lounges in the departure transit areas of the airport’s three terminals. The problem he ran into is that you need a valid boarding pass in order to use a Priority Pass lounge (he had a Priority Pass membership through a Citi credit card), so he ended up forging boarding passes he downloaded from the internet, and then using imaging editing software to alter them. SATS Premier Lounge Singapore Airport He ended up forging 31 boarding passes that he used at just about all the Priority Pass lounges at the airport (and there are a lot of them ).

Everything seemed to work fine (well, as good as spending 18 days in an airport could be), until a lounge staffer caught on to him and called the airport police: Last Tuesday, a staff at the Dnata Lounge at Terminal 1 called police when she suspected Raejali’s misdeeds. He had entered that very lounge as recently as three days earlier, on Sept 3. He had also gone there on Sept 1 and on Aug 29 and Aug 24.

Singapore Changi Airport He pleaded guilty to three of the 31 forgery charges, which is resulting in jail time. This is quite a story. I’m not sure what exactly his motive was in this case. I can’t imagine spending 18 days in an airport, so I’m not sure if he was doing it for the free food & drinks, because he had nothing else to do, or because he was getting some big thrill out of it. (Tip of the hat to Florian) More from One Mile At A Time « Norwegian 787-9 Premium Class In 10 Pictures! About lucky Ben Schlappig (aka Lucky) is a travel consultant, blogger, and avid points collector. He travels about 400,000 miles a year, primarily using miles and points to fund his first class experiences. He chronicles his adventures, along with industry news, here at One Mile At A Time.  read full article